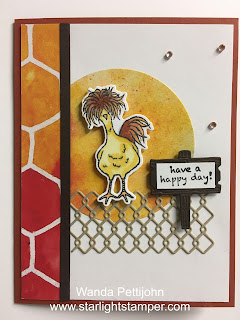 Did you ever buy something and then regret it?  I bought the dies to the "Hey Chick" set and I do regret it. I find it difficult to work with.  I found a card on Pinterest that I thought I could work with.  I made a few changes. You can see the original card here.
The base of my card is a folded half-sheet of Cajun Craze card stock. This card opens on the right and the fold is on the left.
I found some Designer Series Paper (DSP) on my worktable. I do not know what package it came from but I thought I'd work it in.
I cut two pieces of 4" x 5-1/4"  piece of Basic White card stock and taped one on the outside and one on the inside.
I die cut the circle from the DSP using the 2-7/8" circle die. I made sure I moved it close to the edge of my piece of DSP. That piece of DSP had been cut 4" x 5-1/4".  I cut the strip on the left from what was left over from cutting the circle. That strip measures 5-1/4" x 7/8".  I taped the DSP strip to the left side of the Basic White piece.  I added tape behind the circle and slipped it under the strip a bit before I pressed both in place.

The fence was die cut from one of the dies in the "Chick Dies" set. I used a double sided stick sheet so I could make it into a sticker because I didn't want to have to mess with gluing it in place.

I stamped the chick from the "Hey Chick" set using black Memento ink and die cut it out.  Then I colored the chick using my Blends Pens. Light Daffodil Delight for the body and a bit of dark over it for highlights. The rest of the open areas were colored with the light Pumpkin Pie pen. Then I colored over the feathers with some light Cajun Craze and a little dark Cajun Craze in the darker areas.
I die cut the sign using Early Espresso card stock.

The words are from the "Hey Chick" set and were stamped on a scrap piece of Basic White using black Memento ink.  I trimmed it to fit the sign. It measured 1-1/8" x almost a half inch by the time I was done trimming.  I taped the words to the front of the sign. I added Dimensionals to the sign and the chicken.
I set the fence in place and then the chicken and then the sign.

Three crystal rhinestones were colored with the dark Cajun Craze Blends pen and they didn't get very dark but I used them anyway.
The card still needed something so I cut a 1/4" piece of Early Espresso card stock that was 5-1/4" long and I glued it along the edge of the DSP strip.   And I stopped!!!  LOL
I need to search for a cute card using the "Hey Chick" set, I want to try to make a few more cards before the end of the month when it retires.
Thank you SO very much for taking your time to see this interesting creation,
Wanda
Wanda at Tuesday, May 11, 2021