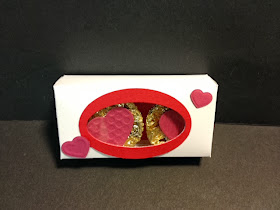 Okay, you are going to have to be more creative with this than I was.  I have several to make so I tend to take the easy way out and decorate as little as possible.  This little box deserves a LOT more decorating than it has.

There's not a whole lot to making these boxes.  I found a place on the internet that you can make your own box simply by entering in the measurements.

Just go to the "Super Deluxe Tuckbox Template Maker" and have fun!  The measurements I entered to make this box are as follows: 8.78" x 3.75" x 1".  This size box holds 2 little Reese's Peanut Butter Cups.    It would probably hold 2 Rolos too, I didn't try it.  I was making this box to hold the peanut butter cups.  I added two hearts to the tops of the peanut butter cups.  I wanted to make the window bigger but the only way to do it was to cut it out by hand.  I didn't want to do that.  I wanted to use a punch and the oval one was the only one that would reach far enough into the box without cutting it at the corners and then being too large for the top.  So I used two oval punches and a piece of window sheet.

Some tips for you when printing out the box you create.  Set your printer so it will print on the lightest setting. You will also need to cut a piece of card stock for the bottom of the box.  If you don't do this you will see the words that print out on the box.  There's no way to get rid of them.  Plus the bottom of the box looks prettier with some color added to it!  And when cutting out the box, there is a part on one of the flaps that has another score line and a longer cutting line (you will know what I mean once you print one out).  Do not score on that line and do not clip the line longer.  That score and cut is so you can fold the flap back further once it's opened.  It's more for a deck of cards.  Oh, there is one more thing.  The side flap has a grayed out area where you are to tape or glue.  Tape or glue on the other side of that.  It looks awful sticking to the outside of the box, only because it's not cut the same size as the side.  I think that covers the tips!

Have fun with this and PLEASE be more creative than I was!

Thank you SO much for visiting today,
Wanda
Wanda at Monday, January 06, 2014